Pod drives entered the market in 2007 and took the boating world by storm. 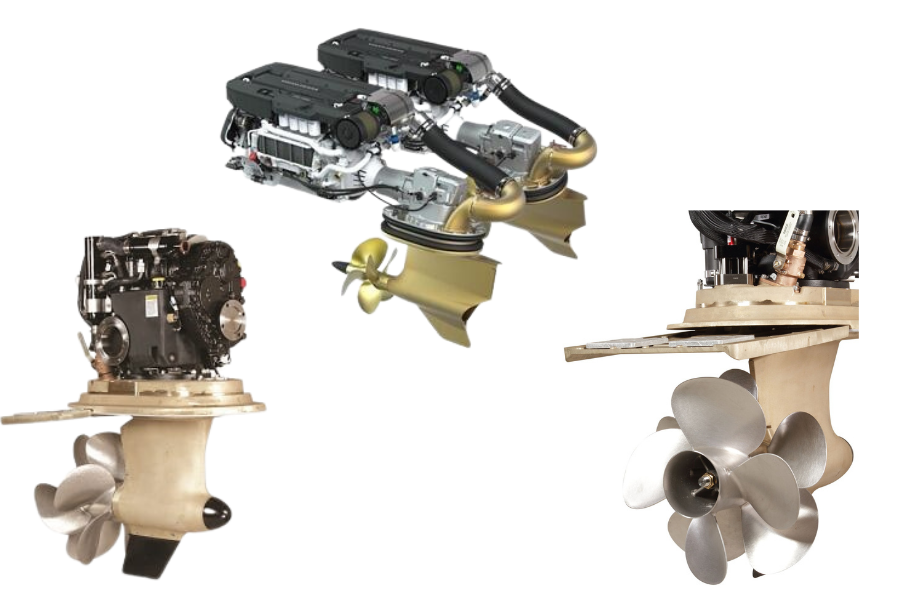 This development in propulsion systems came with high promises; increased fuel efficiency, increased comfort, and ease of use when paired with joystick controls.

There are two main systems you’ll encounter when it comes to pod drives. Namely, Zeus pod drives and Volvo’s IPS System. While similar, there are some important distinctions that will be pivotal in your decision. Read on for the nitty gritty details about the differences between these options.

Note: Zeus pods are sold by both Cummins and Mercury. The pod itself is then attached to an engine made by the respective company. For the sake of clarity “Zeus pods” will refer to Zeus pods sold by Mercury and Cummins.

The Volvo Penta IPS was the first pod propulsion system. The idea is that the  propeller, engine, and rudder are integrated into one unit. Instead of these elements being separate like in straight shafts.

The core feature of pods is maneuverability. By integrating the propulsion system with the steerage system, and allowing the pods to move independently, the handler can move precisely in low speed, tight quarters situations.

This gives you absolute precision with predictable movements in any situation. An attractive feature because control is the key to handling your boat with confidence and staying safe while doing so.

The forward-facing, twin counter-rotating propellers push your vessel straight through the water. No more surprises from prop walk when you least need it; reversing in low-speed, tight quarters maneuvering.

So how does this propulsion system perform?

The forward-facing propellers move through undisturbed water because there’s no engine leg to create disturbance. This reduces cavitation in your propellers which increases performance.

The result at the fuel dock is a 30% decrease in fuel consumption. Your range per tank is increased by 40% compared to inboard shaft engines.

You’ll notice differences on the open water, too, with a 20% increase in top speed. The physical proof of the efficiency of this drive system.

Technicalities aside, the Volvo Penta IPS also improves onboard comfort.

Exhaust fumes are emitted through the IPS and into your prop wash to emerge far behind in your wake. No more smelling fumes while you’re lounging on the aft deck.

There’s a 50% reduction in perceived noise which means that conversation won’t be competing with engine noise.

And lastly, the IPS packs all this performance into a tighter space, meaning a smaller engine room and more space onboard.

How does this translate into the helm? In a word; seamlessly.

The EVC provides protection and diagnostics for both engine and transmission. You can monitor all of this from a display on the helm (and wherever else you’d like).

So you can operate your vessel without leaving your Captain’s chair.

Before you head out to buy yourself some IPS’s, there are some downsides to address.

The most obvious issue comes with the forward-facing propellers. This design offers no protection for your propellers. Your propeller is vulnerable to damage from deadheads, crab pots, or running aground.

However, the leg and pod are designed to shear below the o-ring seal. This leaves the transmission open to the ocean, but won’t allow water into the boat. So if you hit something at speed you might lose a pod, but you won’t sink your boat.

While the main components of the Volvo Penta IPS are top quality, the auxiliary elements are not. For example, the water strainers are made from plastic and, bizarrely, are positioned after the water pump.

Your boat also needs to be hauled out of the water to change the gear oil. This is an unfortunate oversight because you’ll end up hauling your boat whenever you do routine maintenance.

Now let’s take a look at the strongest competitor to the Volvo Penta IPS; the Zeus pod system by Mercury and Cummins.

The Zeus Pod takes the pod propulsion system and seeks to improve it. This system was designed with performance, fuel efficiency, and vessel control in mind.

The first difference you’ll notice is the mounting of the propellers. The rear-facing propellers are mounted behind the leg instead of in front.

This is a result of over 15 years of testing by Cummins and Mercury. Although mounting the propeller behind the leg may increase cavitation, the reduction in drag counteracts this effect.

Another positive when it comes to rear-facing propellers is the protection offered.

Zeus pods are mounted in a tunnel behind the leg. This protects your propellers from floating debris and obstructions. The torpedo is at the same depth as the keel, so most obstructions are pushed down and away from your running gear.

If you come into contact with an obstruction, the skeg is designed to shear from the torpedo which protects the drive and propellers from significant damage.

So all that added efficiency results in safer operation of your vessel.

The real gains in efficiency come when compared to straight shafts. The proof is in the numbers:

So you can go for longer periods between visits to the fuel dock and go faster while you’re doing it.

You’ll see that these statistics are similar to the Volvo Penta IPS’s statistics. Despite their design differences, pods perform at similar levels when compared to straight shafts. The biggest difference between IPS’s and Zeus pods is the position of the propeller.

Onboard comfort is improved too. The counter-rotating propellers and large rubber grommets the engine is mounted on means reduced vibration and engine noise.

Exhaust fumes are emitted into the prop wash. The exhaust rises in the wake, far away from anybody enjoying themselves on your vessel.

The joystick works with your propellers and thrusters to help you maneuver your vessel with complete confidence and control in close quarters and adverse weather conditions.

Holding your vessel in place takes one touch of a button. The Skyhook system will hold your vessel on a fixed heading in a tight area with no additional input from you.

So you won’t have to be on the controls while you’re waiting for a bridge to open or for your turn at the fuel dock.

When it comes to Zeus pods, or any pods for that matter, you’ll be faced with limited technical assistance.

Any marine mechanic knows their way around an outboard or a traditional inboard engine. When you run into issues with your pods, however, it’s difficult to find a qualified technician to help you out.

This is changing as more and more marine mechanics learn about pods, but this difficulty is worth mentioning.

Some other downsides are a reduced turning radius compared to the IPS, though this is minor. Another minor downside is that the Zeus pods sit higher in the bilge than the IPS, which means less room on board.

So there you have it, a full breakdown of the differences between Volvo’s Penta IPS and the Zeus Pods by Mercury and Cummings.

When it comes to performance, use, and comfort, there’s little to distinguish the two.

If you regularly cruise in waters with floating debris or obstacles, like deadheads and crab pots for those of us in the Pacific Northwest, Zeus pods will offer more protection for your propellers.

Otherwise your choice will come down to personal preference. It’s worth remembering that technical assistance can be tricky to find no matter what pods you’re running, although this is changing as more people in the marine industry learn about this propulsion system.